Full Access required.
Or enter your email below to get Free lessons!

To begin with, let’s review what a chord is. A chord is a group of notes derived from a given scale, put together in a cluster. For instance, let’s take the key of Emajor (as presented in the scale charts below). The tonic (I-degree) of E major would be the root, major third and fifth degree of the major scale, together forming a major chord. In this case, E, G# and B. To derive the other chords included in the key of E major, we simply stack the major and minor thirds starting from each of the scale degrees. For example, if we start on the second degree, F#, we would get F#, A, C#, giving us an F#minor chord. This is all well and good, and something I’m sure all of you know already. The idea of touching upon this first, is to better illustrate the difference in approaches we are about to embark upon.

Also, I want to make a disclaimer at this point! Due to a temporary brain-fry I didn't play the I-IV-V correctly in the video. A I-IV-V in Emajor would of course be E - A - B(7). I played an Amin by accident, and didn't catch my slip. So please, just go by what I say at that part (2:02), and not what I played ;) OK, then let's move on! 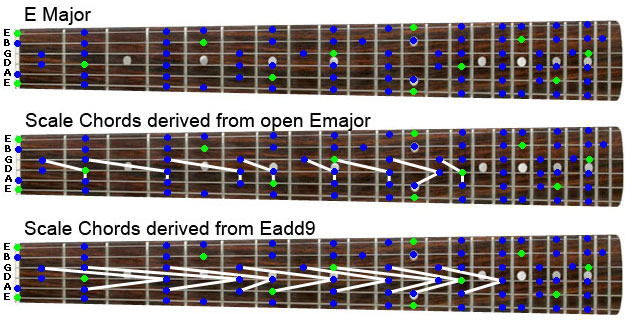