Clefs and Notes on The Stafs

repeat repeat off
/
Update Required To play the media you will need to either update your browser to a recent version or update your Flash plugin.
Note Values and Basic Notation

This lesson will be sort of a short one and cover the Treble Clef, the Bass Clef, Specialty Clefs, and the notes on the staffs. To start off, the 2 main clefs we will look at now are the treble and bass clefs. The treble clef, like all other clefs, fixes the position of a single pitch, which in this case is the G. That is why it is sometimes referred to as the G clef. The clef itself does look a little like a capital G.

Shown here is what the Treble clef looks like on the staff. 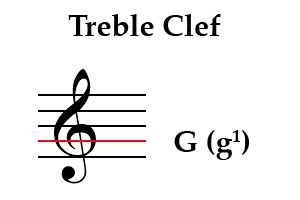 Shown below are the notes on the treble clef.

As you can see, this only shows the notes within the lines and spaces of the treble clef but there are extensions which use ledger lines, which we will talk about in a bit.

When you write music below the treble clef, you use another clef called the Bass Clef, and this one is positioned just below middle c and is sometimes called the F Clef because the two dots encircle the note F in the bass clef. Shown below is what the bass clef looks like on the staff. 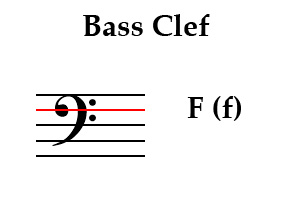 Now there are times when notes go beyond the regular lines and spaces of the clefs, so to extend these notes, we use what are called ledger lines.

Shown below are what ledger lines look like on the treble and bass clefs:

A good thing to remember is that notes that go 3 or 4 ledger lines above the staff are considered too hard to read so if that occurs, it's a good idea to put in an "8va" symbol on the staff, which means "Octave" and all that does is it tells the person reading the music to play those notes one octave higher than written.

The Grand Staff is useful for those who play piano. As guitar players, we probably will never have to use this at all but it's good to know what it looks like anyway. The Grand Staff links together the treble and bass clefs and both staffs neatly flow into each other. The A at the top of the bass clef extends above the staff to a B and C. This C is then linked to the treble clef and goes on up to D, and then to E on the bottom of the treble clef.

The cool thing is, is that the C (which is called "Middle C") is halfway between each staff. So when you write middle C, it might be extended down from the treble clef or extend up from the bass clef depending on where the surrounding notes are put.

Shown below is the grand staff and how all the notes are linked together to form a smooth transition between each staff. 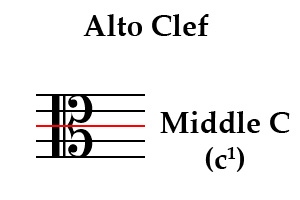 There are a number of specialty clefs that you will encounter in your lifetime, but will probably never use. The most common of these is the alto clef, which is shown below: 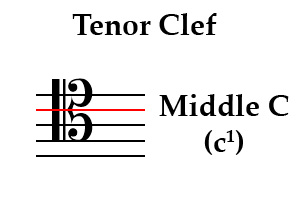 This clef is primarily used by the viola, which is a slightly bigger version of the violin. The pointer on the clef points to middle C, which is in the exact middle of the clef.

This concludes our lesson. Hope you learned something from this. See you next time!