The easiest way that I see remembering this substitution theory is just in a chromatic sense. What that means is that your Tri-Tone substitution chord is going to be a half step above the chord that it is going to. Here is an example: 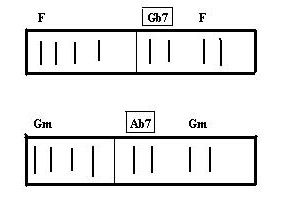 The reason that this substitution works is because that 2 tones in the original dominant 7th chord that you are replacing are also in the tri-tone chord, which are the 3rd and b7th. An example would be that in a C7 chord, we have the tones C-E-G-Bb. The Tri-Tone chord would be F#7 and this chord contains the notes F#-A#(Bb)-C#-E. Notice how the Bb and E are in both chords?