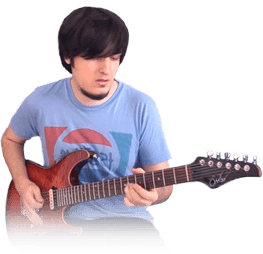 For my whole life I’ve been surrounded with music and decided to pick up the guitar sometime during elementary school. During my late teens I decided to get serious about the whole guitar thing and later attended the renowned Carl-Maria-von-Weber college of music in Dresden. There I paid most of my dues in anything related to music and guitar. I got to play in a lot of bands with a lot of different musicians, an invaluable learning experience. After 5 years of studying, I finally received my diploma in guitar and music pedagogy in 2010.

Right now I’m busy with teaching, session work (very cool news soon!) and of course writing my own album. The latter is going to feature compositions from the last 5 years of my musical journey and a lot of very cool players. Keep an eye out for an early 2011 release!

However, I do get a large percentage of my inspiration from instrumentalists and composers that have nothing to do with guitar: Dave Weckl, Chick Corea, Gary Willis, Michael Brecker, Charlie Parker, Jordan Rudess, Oscar Peterson, J.S. Bach, Frederic Chopin and many more.

All the best,
Martin