In this lesson, we will be continuing our look at the different notes that you are going to encounter, as well as incorporate these new notes in with the ones you previously learned.

The next note division we are going to look at is the Eighth Note, which looks just like a Quarter note but with a little flag on top. There are 2 ways to see this note: you can see it by itself with just the flag, or if you encounter 2 eighth notes together, they may be connected across the top by a beam. This note is held out a half a beat shorter than the quarter note, so when you see 2 of these notes played together, count them as "One and.." Another way to think of it, is that there are 2 Eighth Notes for every Quarter note or 2 Eighth Notes for every beat.

The next note division is going to be the Triplet. This one looks just like the Eighth Note except there are 3 of them within one beat. This one is counted in a different way than the other one's we've learned, because within each beat, we count it as "One-And-Ah" We can also count this out as "Trip-Ah-Let"

The next note division is going to be the Sixteenth note. This note is held out for half the length of an Eighth note. In other words, you play 2 Sixteenth notes in the duration of one Eighth Note. This note looks just like the Eighth note except that instead of one flag, you have 2. When you see one or more Sixteenth Notes together, there can be a bar across the top of them, but with this note, we have 2 bars instead of one. This note is usually counted out as "One-E-And-Ah" 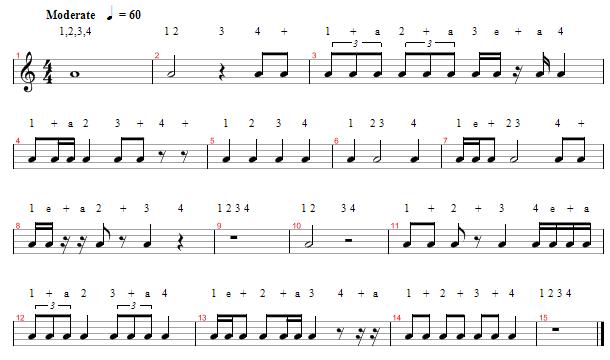