repeat repeat off
/
Update Required To play the media you will need to either update your browser to a recent version or update your Flash plugin.
Intervals Pt.4 (Determining Interval Quality)

Many times, intervals are used as chord fillers in between chords and lead lines and the most common of these are 3rds and 6ths(which are just inverted 3rds). Here are a few 3rd and 6th shapes that are on the neck that you can use:

The cool thing is that even though the Major 3rd sounds like a major chord, and the minor 3rd sounds like a minor chord, the real sound of these intervals comes about when played over a chord. Try playing them diatonically over a chord in succession up the neck which will really highlight the chord. Here is an example of this interval played over an A major chord up the neck to illustrate: 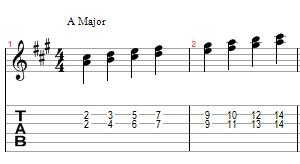 The same can be said for the minor 3rd as well, so here is an example of it played over an A minor chord: 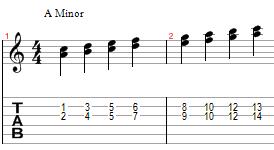 This can also be done with Major and minor 6ths as well. But when playing these, the main problem is keeping the string in between the notes quiet, so try either playing both notes with your fingers or mute with the left hand when playing these: 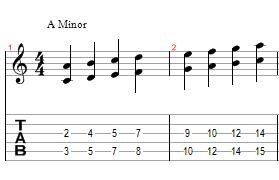 The perfect 5th isn't major or minor so it has an open sound but it carries a lot of thickness and power with it. This is probably the most used interval in rock and metal music.

The Perfect 4th is the inversion of the perfect 5th and is used more in lead lines than anything else. This can also be used as a substitute for a power chord.

Octaves are also a very popular interval used mostly in jazz music. The trick is that along with the 6th, there is usually a string in between that must be muted. This also produces a fat sound, especially with a clean channel.