repeat repeat off
/
Update Required To play the media you will need to either update your browser to a recent version or update your Flash plugin.
Natural and Harmonic Minor Scales

Most songs are built from chords that have their start in the major and minor scales. Each scale can be harmonized to produce different chords. Notes are stacked on top of each other in 3rds using only the notes from that scale or mode you're harmonizing. These chords are: 3-note chords (triads), 4-note chords (7th chords), 5-note chords (9th chords), 6-note, (11th chords), or 7-note (13ths) chords where triads and 7th chords are the most commonly used. Shown below is a chart showing each scale degree and the chord that it is built off of.

A roman numeral is assigned to each chord which corresponds with its respective scale degree. An upper case letter denotes a major chord and a lower case letter denotes a minor chord. The chord built on the 1st degree is given the number 1 (the one chord). The chord built off of 5th scale degree is called the V (the five chord), etc. Assigning roman numerals to chords is how musicians describe chord progressions. For example, one person might suggest that you play a I,IV,V in the key of D. That means play the first, fourth and fifth chords found in the key of D, which is in the harmonized D major scale.

With a 4 note (7th chord) harmonization of the major scale, this will result in the I and IV chords being Major 7ths. The ii,iii and iv chords being Minor 7ths. The V chord is a dominant 7th and the vii is a half-diminished.

This progression is a simple I, IV, I, V in the key of A. The slash chord is nothing more than just an inverted D major chord. Inversions do not affect the numerical value of a chord at all, just the overall sound of the chord. The fact that it's an inversion has nothing to do with the fact it's still a IV chord. 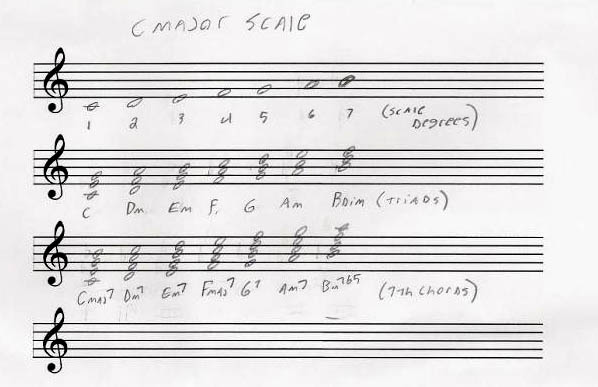